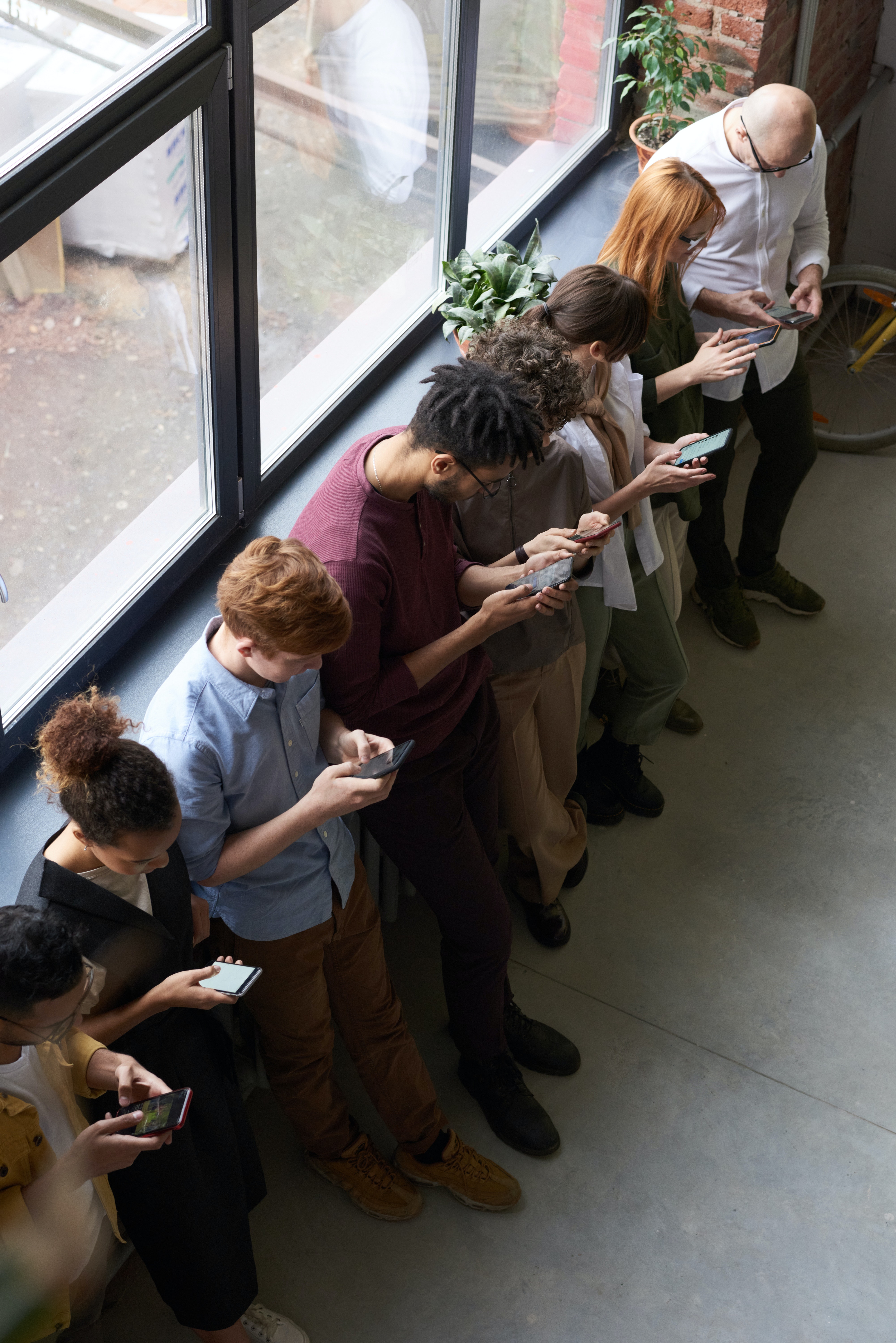 Bell: Let’s talk about what Bell won’t talk about

January 2020 marked the 10th anniversary of Bell Media’s mental health awareness campaign, Bell Let’s Talk, which has fundraised over $100 million. The trend-setting hashtag #BellLetsTalk maximized the virulent nature by which information spreads on platforms such as Instagram, Twitter and Facebook, to create over a million interactions on the topic. The awareness campaign has set new records on the sheer amount of discussions about mental health awareness and curation held in the decade that the hashtag began trending. Some people, however, feel that the success of the campaign is a poisoned fruit and suspect the true motives in which Bell launched the campaign to be less than altruistic.

Bell Let’s Talk is a remarkable product of the internet, where the creation of campaigns to promote change is only possible through interactions via social media. These often include extensive discussions of forums, Reddit pages and Twitter conversations housing thousands of stories and anecdotes of mental illness. Social media platforms have become the go-to forums to discuss sensitive topics at any time. Noticing this, Bell launched an awareness campaign to stir up a discussion on mental health in September 2010 on four “pillars”: Anti-stigma, care and accessibility, research into mental health at home and in the workplace. These tenets proved to be popular enough to garnish discussion each year that the hashtag trended.

The logistics were simplistic but relied on word-of-mouth to work: tweet or share #BellLetsTalk on any social platform and each “interaction” equated to a pledge of five cents from Bell donated and distributed among worthy causes. People expected that discussions and support for those with mental health issues would naturally arise from these interactions. Snapchat messages and Instagram stories joined the campaign as early as 2017, and by 2020, politicians such as Prime Minister Justin Trudeau and famed musicians like the Barenaked Ladies participated in the trending hashtag, adding star power to the campaign. Each year gathered increased global attention, generated heightened awareness for mental health and raised donated funds. 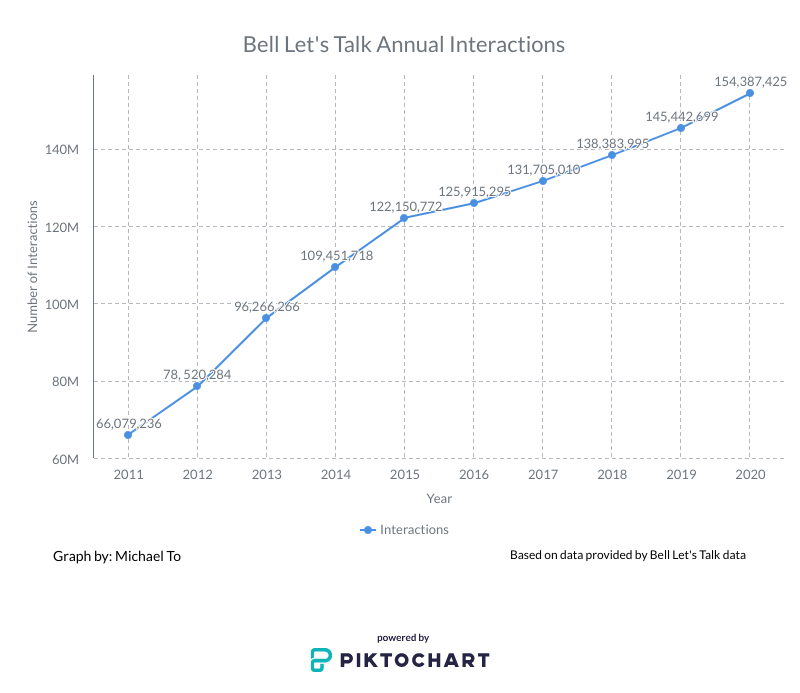 One of the greatest feats of the awareness campaign is the sheer amount of money raised — including hundreds of grants, committed donations and new initiatives to promote mental health. The Bell Let’s Talk website lists all of the beneficiaries of the funds raised, including new 2020 initiatives to support those affected during the months in quarantine during the COVID-19 pandemic.

While the campaign raised millions of dollars and promoted discussion among millions of people, there has been discussion about whether some demographics have become neglected. Toronto Star columnist Mandy Pipher wrote in 2019 that, while many mental illnesses were given the spotlight, some people didn’t fit into Bell’s “target audience,” describing her own difficulties in managing her health issues while dreading the “Let’s Talk” season. Pipher felt that while the slogan “Mental Health Affects Us All” was a great start, the people affected by various mental health disorders could feel an increased anxiety or a sense of alienation from the event. She also questions whether the hashtag adequately includes non-white or impoverished persons in the discussions, and that for those persons she writes: “The reality of mental illness is far from anything that would be approved in a boardroom. It is not clean or clear or pretty.”

One such marginalized group comes from a controversy arising from a 2017 interview with criminal defense attorney Michael Spratt on an episode of CBC Radio’s As It Happens. Spratt pointed out the harsh treatment of Canadian inmates and their limited access to support systems. He accused Bell Canada of profiting from the exclusive contract that limits inmates in provincial jails from making “restrictively expensive” phone calls, preventing any inmates from contacting counsellors or support systems. In the interview, Spratt described the gauntlet that inmates need to get through in order to make a landline collect-call, ultimately running up the bill for local and long-distance calls. In an opinion piece for Canadian Lawyer, Spratt expressed that the public should scrutinize the corporate charity and try to find out what percentage of the money the company gets for all of its fundraising.

With Bell’s public image becoming increasingly associated with promoting mental health, the company has received scrutiny over its internal treatment of mental health issues; this has led a few former employees revealing accounts of abuse. In 2017, a CBC article depicted the story of former employee Maria McLean being fired an hour after giving her supervisor a doctor’s note — one that described her struggles with mental illness — at a Grand Falls, N.B., radio station owned by Bell Media. McLean has not received a reason for her firing, and she said in a CBC interview that “being discriminated against is terrible for someone’s self-esteem and it’s terrible for someone who already struggles.” Bell’s media director at the time of the incident, Matthew Garrow, responded in a Huffington Post Quebec interview on McLean’s situation. “While [Bell] would not normally comment on specific employee issues, I can confirm that Bell does not dismiss employees because of mental health issues, in this case or any other,” Garrow said.

In another example, journalist Jan Wong used to work at the Globe and Mail, which is owned by Bell. Wong asked for medical leave to recover from clinical depression, following a story about a school shooting that she covered. Wrong said that her employers did not believe her, and instead ordered her to work through the depression. They ultimately fired her, prompting Wong to write her memoir, Out of the Blue, about the ordeal.

Commercializing public health and the ‘paradox of corporate activism’

Despite the potential positivity that the awareness campaign generated, some critics observe that it is difficult to separate the commercialism from the humanitarianism surrounding the annual event. In a 2019 investigation published by Jasmine Vido of the University of Windsor, Vido suggested that Bell’s awareness campaign can’t shake “the paradox of corporate activism.” As Vido told the National Post, “There is a common paradox associated with corporate activism, which involves simultaneously spreading awareness for an issue while promoting a positive corporate message.” Specifically, since the hashtag itself uses “Bell,” it becomes impossible to separate the message from the brand. In her piece, Pipher described a similar idea, saying that the hashtag seemed “like advertising for a corporation dripping in the money desperately needed by many of those suffering from mental illness, with genuine concern for mental health suffers a distant second.”

In a 2018 interview discussing Bell’s marketing strategy for the campaign, Ryerson University marketing professor Ida Berger said that Bell’s efforts have successfully been part of changing the public view on mental health. Berger added that while the branding challenge was tricky, authenticity was critical. “Consumers are not stupid,” she said. “They can see through things that are simply marketing ploys.”

Bell has stated that the final decision to keep its name in the hashtag was to make a statement that the company was willing to de-stigmatize mental health by placing its brand in line with the issue. In 2008, Mary Deacon, the Chair of Bell Let’s Talk, met with Bell Canada Enterprises chief executive George Cope to revamp the company’s corporate social image and to begin the mental health initiative. She was convinced that Bell was the best candidate to both curate and promote the message. “I would not have come to Bell if I did not believe absolutely that there was a genuine, authentic commitment to make a difference,” she told the Financial Post in 2018.

Taking the good and the bad of Bell’s initiative

Bell embarked on a self-imposed challenge to bring awareness to mental health, through mass media discussion and successful advertisements; it arguably launched a decade of meaningful improvements to support systems. This awareness campaign clashed with Bell’s own brand and marketing, confusing the overall messaging on combating mental illness, and sometimes isolating those it was meant to help. On the one hand, Bell has generated millions of dollars, and kickstarted dozens of initiatives and grants to assist those dealing with mental illness. On the other hand, however, Bell has a few public image issues, with cases of employees being fired or dismissed while dealing with mental illness. There are still worries that Bell Let’s Talk allows minorities to fall through the cracks of discourse, and that Bell gets away with too many duplicitous scandals under Canadian purview.

Every year, Bell Let’s Talk raises more money and awareness for mental health initiatives, but it seems increasingly astute to keep an eye on Bell, and to keep the company honest, even if company executives refrain from doing so themselves.