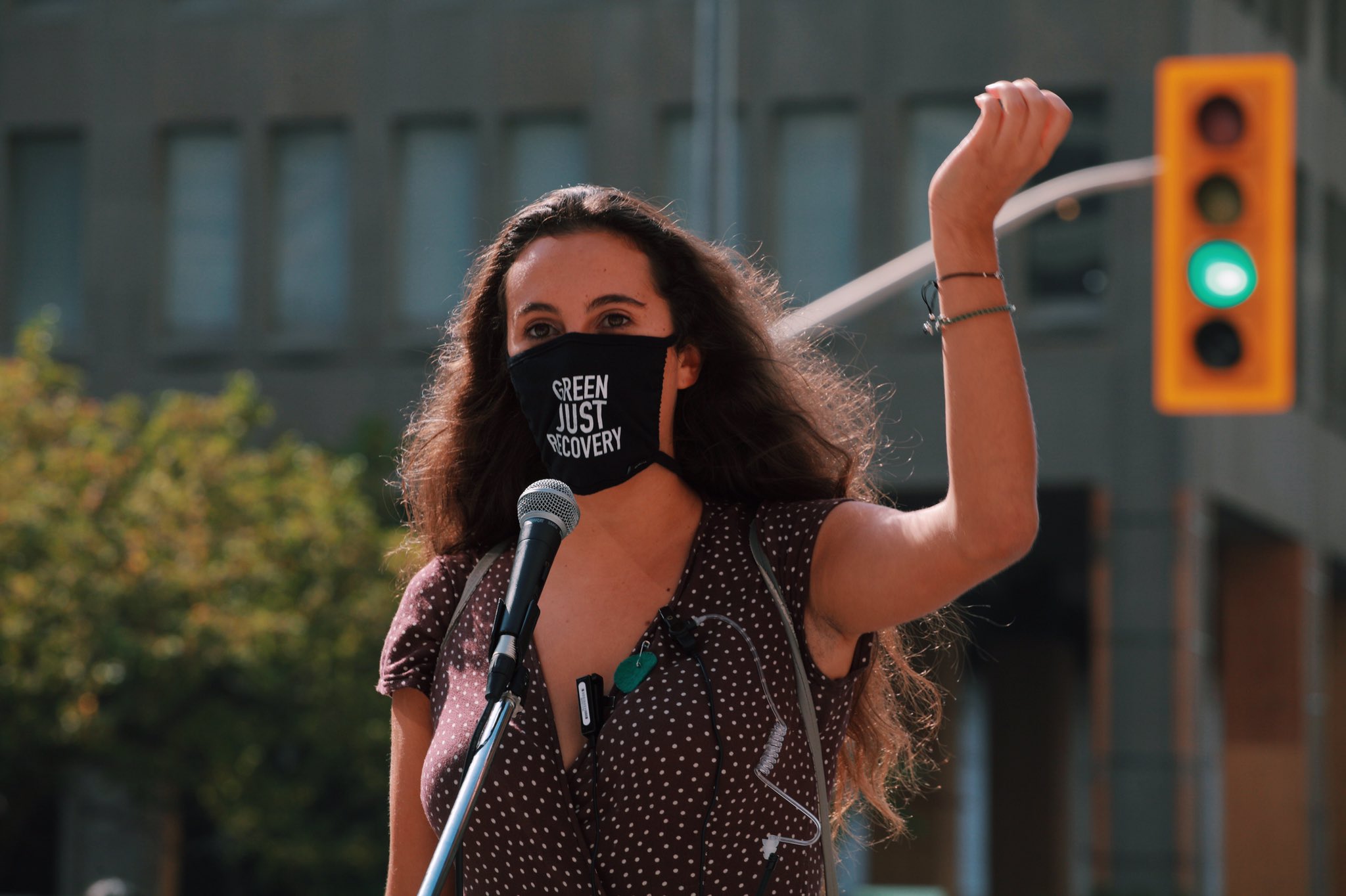 Rougeot, a climate activist in Toronto, says that ‘having meaningful conversations’ is a way for young people to make a difference.

Rougeot says that after she saw the early effects of the COVID-19 pandemic, her fight for climate change legislation became an even more daunting task.

“I almost thought, like, ‘Should I stop climate activism?’” she said. “Because [the pandemic] just set us back a whole lot in terms of pursuing environmental regulations, since [governments] have to put money elsewhere. This is just so big.”

Rougeot, 21, has been a climate activist since she was a young child. She credits her mother for helping her get started. Growing up, Rougeout’s mother only allowed her to use the computer to read or watch educational content.

“The very first few times I accessed the internet, at [age] 10, I’d end up watching documentaries about biodiversity loss,” Rougeot said. “To a young child, I think that’s very baffling, that us humans could be causing the extinction of other beings.”

Rougeot says she started looking up campaigns and petitions, began to use her school projects to talk about the environment, and progressively became more and more of a climate activist. In the past few years, while attending the University of Toronto for her undergraduate degree, Rougeot has been the lead co-ordinator of theFridays for Future movement in Toronto.

Fridays for Future, which is active globally, led theclimate strike rally that saw tens of thousands of people gather outside Queen’s Park in Sept. 2019. Rougeot and her fellow activists planned another rally for April 2020, but it got sidetracked by the sudden escalation of the pandemic. The group quickly pivoted into an online “webinar.” Rougeot says it was more like an online rally than a webinar, however, with activists coming on remotely for quick speeches and musicians playing, just as they would do at a rally.

Since then, the group has been organizing smaller, hour-long “online strikes” every week, exploring different themes of the climate crisis. They have rotated between different people leading the discussion “to help more young people find their voice[s],” Rougeot adds.

She laments how much momentum the group of climate change activists lost due to the pandemic — the money the government had to use elsewhere, the lost opportunities for in-person strikes and the media coverage that suddenly disappeared. “All of a sudden, they don’t want to report on online activism,” she said.

Rougeot says that the pandemic was “absolutely horrible and devastating” for so many people, but many students, including her, found a small silver lining: an increase in free time. This led to more young people becoming involved with Fridays for Future and gave the organizers more time to integrate the newcomers.

“We saw a huge rise in our intake of youth joining the movement during that time,” Rougeot said. “And I think we, organizers, had time to welcome them properly and help them in the areas they weren’t sure of their skills.”

Rougeot says that the organizers usually do what she calls “emergency planning,” where they are constantly rushing to plan future strikes — which is no small task. During the pandemic, they got the chance to properly introduce new people to their group and provide them with the education and resources they need to be effective climate activists. Rougeot adds that the nature of online activism may have helped some more shy people join the group, when they otherwise may not have felt as comfortable.

“We had a small rise in more introverted people that, I think, were less intimidated by an online interaction than a whole in-person meeting,” she said.

The need for government intervention

In a story for the fall issue of Youth Mind, climate change experts said that the response to the COVID-19 pandemic must be matched for climate change, in terms of resources and money used toward overcoming the crisis. Rougeot says the key takeaway from the pandemic response is that individual actions are not enough without a strong backing from governments.

“I think the pandemic showed something really powerful, which is that, yes, individuals can do a bit. They can try to stay home, and they can try to do stuff. But if the governments hadn’t sent in a cheque to people, people would have had to go to work,” she said. “And so, same with climate — yeah, people can try to use [a form of transportation other] than their car, but unless the government puts good public transit, they really can’t do that meaningfully.

“It shows that the reason we have governments is because sometimes, the cost is too much [for] the individual. And we should be thinking that way for climate, too.”

That raises the question, however: If government intervention is necessary, then what hope do individuals have? For many young people, the need for structural changes makes it feel like their individual actions to combat climate change hardly make a difference. To them, Rougeot’s message is simple: Talk about it.

“On a daily basis, engage in things that are system oriented,” she said. “One [thing to do] is always engaging in conversations around the climate crisis. People don’t realize how far this goes.”

Rougeot cites her family as an example close to home. She says just a couple years ago, her grandparents used to have doubts about whether climate change was really happening. Rougeot helped educate them about the science behind it; they now understand the climate crisis and sometimes even send her articles about it.

“Having meaningful conversations regularly with the people that trust you actually goes a huge, huge way. I can’t stress that enough,” she said. “Through talking about it, you’ll just normalize the idea that the climate crisis is there. And then, if that’s no longer a debate, we’ve won a huge battle.”

Rougeot says it is understandable and rational that many young people have eco-anxiety, which the American Psychological Association defines as “a chronic fear of environmental doom.” In Nov. 2019, Rougeottold NOW Magazine that eco-anxiety is “the awareness that the climate is threatening most aspects of our lives,” which can be distressing and overwhelming.

The climate crisis may feel bleak, but Rougeot says that those who suffer from eco-anxiety should try to appreciate that if people can even prevent the global temperature from rising a fraction of a degree more, the efforts will be worth it.

“Knowing that your action won’t be vain — because it’s not a zero or one situation, it’s a continuum — I think that motivates me,” she said. “I can’t solve climate change, [but] I can reduce as much as I can.”

Rougeot adds that actions to slow climate change — both by governments and by individuals —also tie into other important topics, like human rights and mental health issues. She says it brings her hope, knowing that these issues are interconnected and can be solved together.

“You realize the window that’s opening with the climate conversation is big enough to put other topics you might care about,” she said. “Kind of saying, ‘Wow, science is backing a lot of other things that we couldn’t back before.’”

Rougeot says it is difficult to know why a lot of people who believe in the scientific fact of climate change still appear to be indifferent about it. She says for those who “can’t see what’s in it” for themselves, that even if the lives of current generations aren’t impacted much, the lives of future generations — like the children of Generation Z — will certainly be affected.

“Right now, I have the power to prevent future suffering. If I refuse to do that, what does that make me?” Rougeot said, regarding what she would tell people who are indifferent about climate change.

To answer her own question, Rougeot says she feels like it would be “incredibly selfish” to know that she could reduce future suffering and still not do anything about it. That’s one of the reasons she decided to continue her activism, even after the pandemic created new obstacles.

For Rougeot, one thing is clear moving forward on climate activism: The status quo is not tenable. It’s only a matter of time before more people around the world begin to realize what’s coming, and people must adjust their habits to help combat the climate crisis.

“Change is going to happen,” she said.

“Do you want to be remembered as one of the few that didn’t?”