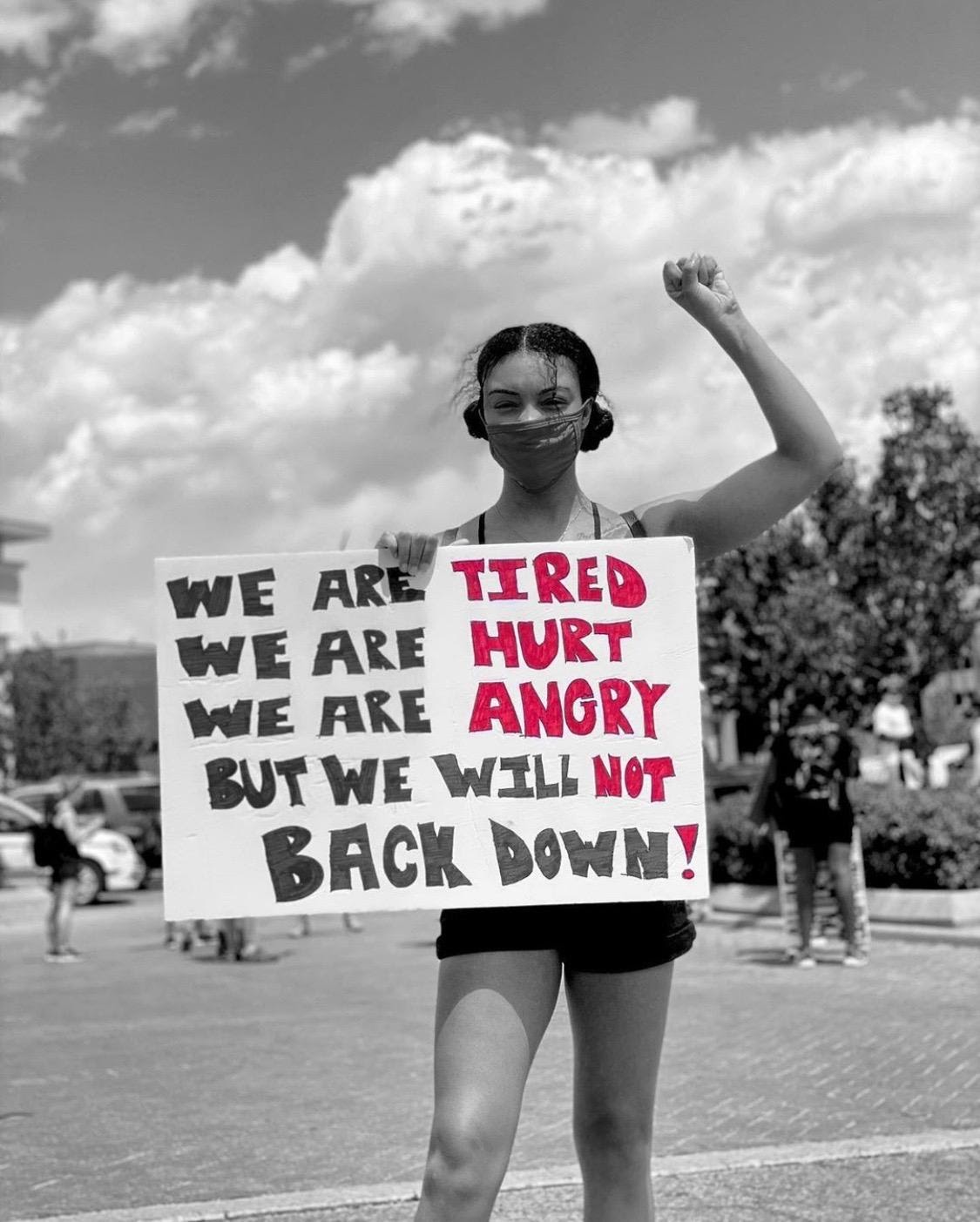 Not a moment but a movement: How youth are at the forefront of combating systemic racism

By now, we all know of George Floyd.

We know how he died. We know how one of the police officers, Derek Chauvin, had his knee pressed on Floyd’s neck for at least eight minutes during the arrest, as three other officers stood by and did nothing.

And we know the global impact Floyd’s death has made, with young people at the forefront of it.

We’ve seen the protests and marches happening around the world, including here in Canada, a country built on systemic racism toward Black and Indigenous communities.

The looming question begs: Now what?

How can we, young people, keep going, post-rally, post-march, post-protest?

Education on systemic racism is key

Selam Debs and Carla Beharry, co-creators of The Anti-Racism Community Collective (ARCC), believe that it is imperative that everyone — young people included — should be educated on systemic racism in Canada, in order to continue to make change.

“I don’t think they know that systemic racism is happening all around them,” Debs said. “We think that it's this huge, in-your-face kind of situation that happens. But oftentimes, it’s the experiences of racialized people, specifically Black and Indigenous people, that are not being seen and not being talked about.”

Debs says she grew up in neighbourhoods predominantly made up of Black and other people of colour. When she talked to white friends of hers, they would often not be aware of the experiences of racialized people such as herself.

“People were not aware of our experiences and how the system forgot us,” Debs said. “The fact that we were constantly around yellow tape, around police surveillance, that we lived in cockroach-infested apartments.”

She cites the lack of diversity and representation in entertainment and executive positions at companies as other examples of systemic racism, as well as the disproportionate amount of Black and Indigenous people who are incarcerated.

“That is systemic racism: Being comfortable with looking around and seeing white-only spaces, white boardrooms, white judges, white lawyers, just a whole sea of white people around you and that doesn’t trigger something inside of you to go ‘Oh, something needs to change,” she said.

“It’s every day, every moment, occurring in every space.”

Gerard Asamda, a criminal lawyer who is Black, agrees.

“I think courses on race should be mandatory from high school to university,” Asamda said. “About different places, how you can work with someone who doesn’t look like you, or speaks differently from you. I think that’ll make other people more comfortable to stand up to injustices, especially against Black people. They don’t realize they have the power to change those injustices.”

Asamda has had to prove himself time and time again to show he belongs in a courthouse. He says that for racialized people, even after proving you’re a lawyer and completing your education the same way as everyone else, people still doubt you because you don’t look or talk a certain way.

But it’s not just him who has been impacted by systemic racism. Asamda says that systemic barriers, especially against the Black community, stop BIPOC individuals from being able to gain employment in certain companies.

“People don’t believe we are competent enough and that certain occupations belong to certain individuals,” he said.

According to Statistics Canada, the unemployment rate for Black women and men is one and a half times higher than the rest of the population.

In another study conducted by the Diversity Institute, ‘Black Experience Project’ found that eight out of every 10 individuals experienced various micro aggressions throughout their day-to-day life.

More recently, the Ontario Human Rights Commission released a report indicating Black people are disproportionately arrested, struck, and shot down by Toronto police — so much so that they represented almost a third of all charges in the data, despite representing only 8.8 per cent of Toronto’s population.

Debs and Beharry also believe that racism should actually be called white supremacy.

Both believe that it is important to bring attention to the forces and people who work to keep racism and systemic inequality alive. According to them, part of white supremacy is deflecting the conversation to other things, like the often-powerless victims, to avoid change. Debs adds that although the term racism makes white people feel uncomfortable, it doesn’t exactly hold them accountable.

Amber Bimm, an avid BLM protest attendee and a recent graduate from Western University with a bachelor of health sciences, says that it is also crucial to educate the white community about racism and inequality at a young age.

“No one is born racist, they are taught it,” Bimm said. “Spreading awareness at a young age is important.”

Young people are the future of making sustainable change

“There are many means that that education [on systemic racism] can be spoken about like through music, spoken word, talks, reading, authors.”

This is part of the reason as to why the ARCC was created. This educational platform, which is active on Facebook and Instagram, aims to provide resources and information on racism in Canada, to help people speak out on systemic racism.

Bimm is one of those young people speaking out on systemic racism. She uses her social media platforms to post information and awareness on the matter.

“I find it important we use our platforms for our voices to be heard. Examples of this would be putting links to resources that contribute to these issues and ways that can help,” Bimm said. “It could also be a very informative tool in terms of sharing facts and statistics that can be very eye opening to many individuals. It’s a great way to get the message around and to keep fighting for social justice.”

Another reason why Beharry and Debs have hope in the young people is because they make being anti-racist a part of their being, whether on their own accord, or through the influence of their peers or parents.

“I think any parent who is exposing their child to anti-racism talks, books, and diverse spaces the more kids have a solid understanding to say ‘OK, this is an everyday life,’” Beharry said.

There has been some sustainable change as a result of young people being at the forefront of combating racism.

In an Instagram post by Waterloo-based group ‘Students 4 Inclusive Schools,’ the advocacy group calls for the removal of armed police officers in schools, stating that they do not feel safe. By June 22, trustees of the Hamilton-Wentworth District School Board voted to end the School Resource Officer Program. Instead, they will now be focusing on programs that can help marginalized members of their community.

“I think when kids are empowered and elevated to say ‘You can do this,’ there’s a ton of knowledge in that,” Beharry said. “Especially high school age groups of children who have the ability to make systemic change.”

All in all, one thing is clear: The time for substantial change is now. Action is calling; will you answer?