Justine Ammendolia and her partner Jackie Saturno were on a trip to the supermarket when they first noticed a problem. Only days after the pandemic was declared in March 2020, they were already seeing piles of disposable face masks, hand gloves, disinfectant wipes and other personal protection equipment (PPE) surrounding them on the streets of Toronto.

Both being environmental scientists whose summer plans had been cancelled due to COVID-19, they set their sights on a new goal: picking up the waste and tracking how much there really was.

In a matter of two weeks, Ammendolia and Saturno found 1,300 items of PPE waste in one Toronto community and since then have picked up thousands more from hospitals, residential areas, grocery store parking lots and hiking trails.

“The amount of PPE wasn’t really kind of a mind blowing part, for me at least. Looking at the problem, I think it was just how quickly it started to happen in the environment,” says Ammendolia. “It’s just become a staple of our litter environment.”

COVID-19 has caused a vast increase in public use of disposable PPE. Face masks have been required throughout the pandemic in every province in Canada. But this is a new type of plastic that has never been part of the Canadian consumption diet before, and many people aren’t sure how to properly dispose of their PPE once they are finished with it.

The environmental effects of PPE

Most PPE is not recyclable because the items often clog the systems that sort materials and would cost more for local recyclers to collect and process than the materials would be worth.

Throwing PPE in recycling bins also poses a health risk to collectors during the pandemic. As a result, the United Nations estimates that 75 per cent of used masks and other pandemic-related waste will end up in landfills or oceans.

It’s a problem around the world, and as Ammendolia and Saturno have demonstrated, here on the streets of our own Canadian cities too.

Ammendolia is a marine biologist who researches plastic pollution, and explains that PPE is harmful to the environment because of the contamination it creates. While many people misunderstand masks and wipes to be paper, they are made of micro plastics that break down over time.

“If you leave them there long enough, you end up with these really, really tiny fragments that literally become impossible to clean up. No amount of effort or money can really address that problem,” Ammendolia says.

This becomes a larger issue with COVID-19 because people don’t want to touch used PPE without proper protection for themselves, which results in the waste sitting in the environment for longer.

PPE can also pose a threat to wildlife. “There’s been a lot of dialogue on animals being trapped and entangled in plastics or animals eating plastic by accident. You know, that was shown fairly early on in the pandemic, where people were going on social media and sharing pictures of birds with masks around their necks,” Ammendolia says. “How do you value an animal’s life?”

With more people worrying about the waste they are creating during the pandemic, a few recycling initiatives have popped up to prevent PPE from being taken to landfills.

TerraCycle is a program that allows individuals, businesses or municipalities to mail in their waste to be recycled. Those who use this service receive an “All Zero Waste Box” to fill with their PPE to be sent back to TerraCycle, which then sorts the waste and recycles the materials into reusable forms. In terms of PPE waste, the materials are crushed into a crumb that can be used to make plastic lumber found in decking, outdoor furniture and shipping pallets.

While this prevents PPE from entering landfills and oceans, the boxes cost a minimum of $120. This makes it difficult to get people on board when it is easier and cheaper to throw PPE away.

20-year-old environmental activist, Mackenzie Brochu, believes the way we will see change is if youth step up and start caring about this issue.

“We’ve heard all about straws, we’ve heard all about plastic bottles, but this is just another form and it’s kind of a constant cycle of destruction happening to the planet,” she says. “I think it’s very pertinent to young people because it is our future. The older generations have played a big role in the environmental destruction that has occurred thus far, but they aren’t going to have to live through all the effects.”

Brochu says that if people don’t try to take care of the environment, then climate change will only make pandemics more frequent. “It’s kind of a chicken and egg thing because we have this pandemic, but we are still being wasteful to the planet at the same time in the way that we are dealing with it.”

But while individuals are accountable for much of the garbage that ends up on the streets, Ammendolia says that the government should be putting more effort into educating people and improving waste management systems across Canada.

The government has had clear instructions on wearing a mask, but not on what to do with the mask when finished wearing it. This especially becomes problematic when people are away from home or on public transportation.

Ammendolia notes that a lot of people were putting their masks into overflowing public garbage cans. She believes that garbage cans should have been labelled or had instructions to raise attention to the fact that PPE is not regular waste and needs to be disposed of in a more thoughtful way. “The messaging wasn’t clear, nor were the collection methods,” she says.

For now, Brochu recommends cutting off the strings of face masks and properly disposing of them or buying reusable masks if possible. It is easy for PPE waste to become out of sight and out of mind, but Brochu wants to remind people of how actions have continued effects. 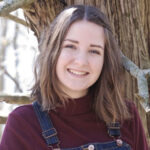