Ezra Morrison has just completed their degree in sexuality diversity studies at the University of Toronto. They are eagerly entering the job market, looking for an entry-level job in their chosen field.

“My dream job would be to work with specifically trans and non-binary youth. I’d love to work at The 519 Community Centre or something like that,” Morrison says.

Morrison identifies as non-binary and has their pronouns at the top of their resume, beside their name.

“I think that cisgender people putting their pronouns in their bio on social media or in their email signatures and resumes really works to make the world a safer place for trans and non-binary people because it doesn’t single us out and normalizes sharing pronouns openly,” Morrison says.

Cisgender is a term that refers to people who identify with the gender they were assigned at birth.

Non-binary individuals are not limited by the two traditional gender categories. They define themselves in various ways outside of the gender binary. Non-binary people may identify as gender identifications such as genderqueer, agender, genderfluid, bigender. Gender is an expansive spectrum. There are no limits to the ways that individuals may interpret and identify their own genders.

A common misconception is that pronouns determine someone’s gender identity. Many non-binary people identify with the singular they/them pronouns, but this is not true for all non-binary people. Some non-binary people may choose to go by she/her or he/him because those are the pronouns with which they are comfortable. Others may choose a hybrid, such as she/they or he/they, meaning they would like to be referred to as both of those pronouns interchangeably.

There is also a newer, separate category of pronouns called neopronouns that are not she, he or they. Some non-binary individuals may feel most comfortable using neopronouns. An example of these are xe/xem/xyr or ze/hir/hirs.

As of 2021, Statistics Canada has altered the census to include new gender information. This includes more extensive statistics on people who identify as trans and non-binary.

Morrison has found that navigating their daily environment as a non-binary person has been a struggle at times.

“It’s tough because I present in a way that is more masculine, so when I’m out and about, I get misgendered a lot. My friends all know that I use they/them pronouns and they’ve been great at using my correct pronouns. But out in the world, around strangers, it’s a whole other story.”

Morrison says it was an adjustment for the people in their life to get used to their pronouns. But they all put in an effort and were corrected when they mistakenly used the wrong pronouns.

“When someone slips up and uses the wrong pronouns, it’s best to just correct them and move on. When people profusely apologize or make a big scene about getting my pronouns wrong, it draws attention to me and makes me uncomfortable. I’d prefer that the person just moves on from their slip-up quickly and tries to be more thoughtful in the future. Slip-ups happen. It’s okay.”

Morrison says that misgendering is something that non-binary people have to deal with quite often. However, correcting people is a way of advocating for themself and the non-binary community as a whole.

“It’s important for me to be firm and proud of my identity. More and more people are coming out as non-binary,” Morrison says. “It’s becoming more normalized and accepted. All because people are brave enough to be themselves loudly.” 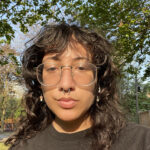 Dru Gary (she/they) is a journalist for Youth Mind. She is a queer BIPOC poet and writer and a recent graduate from OCADU with a BFA in Creative Writing. She loves words and the act of stringing them together to create arrangements that are both beautiful and meaningful. They find inspiration in the intangible and attempt to create images out of abstract thought to understand and ground themselves. She ultimately seeks truth and healing through her practice.