In fact, for the majority of his life, the Tik Tok user with 400k+ followers was thinking of pursuing a career in business.

“I decided to do business because I wasn’t sure what to do,” Han said, referring to the path he chose coming out of high school. “[Even] throughout university, that’s the program and life that I committed to, and throughout my co-op terms. It was all reinforcing me that this was the path I was going to take.”

Though he’s always been a creative person, Han initially pictured his life like so: He would graduate from the accounting and financial management program at the University of Waterloo in Dec. 2019, pursue a master’s degree in accounting from Jan. 2020 to Aug. 2020, take his Chartered Professional Accountant exam in Oct. 2020, and start working full-time in Nov. 2020.

However, something changed for Han, especially toward the end of his university degree. Han realized that being in a new environment, meeting new people, and living by himself during his time at university exposed him to “how the real world would be.”

“I was already kind of in too deep, finishing four years of my bachelor’s degree,” he said. “If I were to do my master’s and then finish my CPA, I would just be too committed in this life to even think about attempting to try something else.”

But that wasn’t all.

“As time went on,” Han said, “there have been a few tragic events where the people I know either passed away or experienced something tragic in their lives. It started to make me think that what if something like this happened to me someday?”

Han said that he started to realize that a standard, corporate job likely wouldn’t satisfy his ambitions. He said the tragic events that he witnessed helped him realize that “life is too short.”

“It started to push me away from the fact that I don’t want to be content with just working in a nine to five office and trying to grind the corporate ladder,” he said. “I don’t think that’s worth it.”

The spark for pursuing the social media route started during Han’s last co-operative education term at the University of Waterloo. Being the big anime lover that he is, Han would come home from work and unwind by watching anime reaction videos on YouTube. Soon enough, he began to create videos of his own.

“They look like they’re having fun, and I felt like I could do this too,” Han said. “I wasn’t expecting to make money, I was just doing this for fun.”

Han said his YouTube channel was successful until it was terminated due to copyright infringement.

And so, instead of pursuing his master’s degree, like he originally planned to, Han decided to take some time off. Han worked on creating a second YouTube channel, though it ended up not being as successful as his original channel. He also continued to be a part of a dance team at the University of Waterloo.

“I was commuting back and forth from Toronto to Waterloo, so I would often crash at my friends’ place,” he said. “One of them showed me Tik Tok.

At first, Han was not impressed.

“This is Musical.ly 2.0, and Musical.ly was known to have cringey little kids doing lip synching videos,” Han said. “In the beginning, that’s what Tik Tok was about, too. Tik Tok basically bought Musical.ly and they merged into one.”

According to Han, the demographic of the platform changed around March 2020, when the COVID-19 pandemic hit North America.

“The demographic expanded from being middle school and high school kids, to people who are 18-plus, young adults, even more middle-aged people,” Han said. “The content really diverged from mainly cringy lip synching videos to a lot of funny videos, skits, educational videos and informative videos.

“It really became a platform where I could try to use my personality and my knowledge of how I see certain things and how I want to communicate certain ideas.”

Han did not anticipate just how quickly his number of followers would grow.

“The first video I made was in my friend’s room at 2 a.m.,” he said. “No one is going to see this, no one is going to judge me, I’m just doing this for fun. The next day, it got 500 views. Even though it’s really little, I was kind of shook by the fact that a random video could get 500 views. To me, views on YouTube are pretty hard to get.”

Han began creating BTS and K-Pop content on his Tik Tok account, which is where he really started gaining followers quickly.

“I was hooked at that point. I thought that this was better than YouTube just because of how easily some videos can go viral,” he said. “I know Tik Tok’s algorithm is just different, it gives new creators the opportunity to go viral regardless of how big their fanbase is. I think the idea of that is really enticing and attractive.”

Now, nearly six months later, Han has surpassed the 400k mark in followers. He gains an average of 1,000 to 2,000 followers a day, which he says is normal for an account as large as his.

Now that he has hit this milestone, what’s next for Han?

“This is the time to go for one million [followers],” he said. “It doesn’t seem that far away anymore.”

Han also says that he is in the “foundation building stage,” as he is attempting to create monetary income from his current popularity.

“In the North America market, and the rest of the world, I think Tik Tok is still relatively new,” Han said. “Monetization is still in the beginning stage. Hopefully, us creators can start being paid per video on a passive basis.”

While Han hopes to gain potential ad revenue and create brand deals in the future, he is involved with his side projects pertaining to his followers, including an online course available for those who are interested in growing their Tik Tok fanbase. He also continues to grow his Instagram page, recently created a Discord community and is selling clothes.

“Even if it doesn’t work out, I feel like I’m still in my youth,” he said.

“This is the best time to explore.” 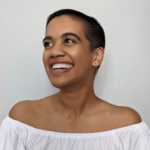 Ramona Leitao is a former managing editor of Youth Mind. When not writing, or taking photos, you’ll find her baking her signature baguettes while crying to Studio Ghibli soundtracks.